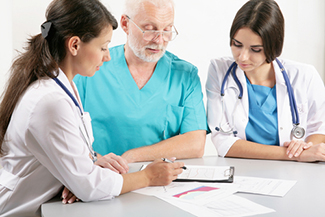 Medical training was grueling during my residency nearly 20 years ago. After completing four years of medical school, new MDs routinely worked 110+ hours per week in their area of specialty, for anywhere from three to 13 years. It was not unusual to work stretches of 30-40 hours in a row without sleep. Three times after a work shift of 35 or more hours, I fell asleep at the wheel on my way home from the hospital and rear-ended someone. (Thankfully, nobody was ever hurt.)

When working, the combination of adrenaline and caffeine kept me sharp, and I never felt that my care of sick kids was ever less than the best I could give. In every situation during residency, I was working in a team of physicians at many levels of training, and we constantly provided checks on each other’s thinking. Medical students with years less experience than myself, other residents of roughly my training level and fellows and very senior attending-level doctors with decades of experience worked together on every child’s case.

The goal of the residency years was to teach me everything I would need to be a safe, effective and knowledgeable pediatrician able to function independently at the end of my training. It was an incredible experience, and I would have changed none of it (except for those three fender-bender moments).

But the system of cramming so much learning into a relatively short number of years by working extraordinary hours has been controversial. In 2003, fueled by concerns about medical resident fatigue and errors and under pressure from Congress, the Accreditation Council for Graduate Medical Education issued national regulations for medical resident duty coined the “80 Hour Work Week.”

The rules have now been in place for several years and have generated interesting and controversial results, including:

What’s the right answer? How do you teach young physicians a vast amount of crucial knowledge in a safe and effective manor in the minimum time required? I’m not sure I know. The average physician coming out of school now has a debt of over $300,000 to repay, so everyone is eager to get a job and start paying off their loans.

Thus, my answer of “make residency longer” doesn’t sound good to most young doctors going through training. But it seems to me that if you’re not allowed to work the crazy brutal hours we used to work, which clearly had its significant drawbacks, the only way to get the exposure we had to sick patients is to add another year.

I hasten to add that the physicians who are recently out of training and are joining Eugene Pediatrics are excellent young doctors. Drs. Chase, Romanoski and Sidor are all incredibly bright doctors and have a vast fund of knowledge. I would let any of them take care of my own children without hesitation. These individuals were among the shining stars of their residency programs, and I made sure to hand-select the best of every class to join our practice here in Eugene. In general, I suspect the mandates of the 80-hour work week have had less an impact on the “thinking” specialties like pediatrics than they have had on surgical specialties.

The medical profession is increasingly under a microscope, as we see national health care reform unfold. All of it is a work in progress. So, it should come as no surprise that the way doctors are trained is also being studied. I will be among those fascinated with the results, as should we all be.

After all, we are all patients at times, too.

Mental health issues, including anxiety and depression, is now the No. 1 health problem facing adolescents in the U.S., exacerbated by the COVID-19 pandemic that began nearly two years ago.
Read More >>

Reducing the risk of drowning

Drowning remains the leading cause of unintentional death in children who are 4 years old and younger. As summer heats up in western Oregon and more people enjoy water activities, Dr. Pilar Bradshaw encourages families to take precautions to reduce the risk of drowning.
Read More >>