Talking with your child about social media dangers

Talking with your child about social media dangers

It wasn’t too long ago that the term social media meant Facebook. Now, there’s Twitter, Instagram, Snapchat and a host of other apps teens use to connect.

With so many avenues in which to share videos, photos and messages, it’s unfortunate that harassment, bullying and sexting have become serious issues.

“It’s gotten so bad, especially on Twitter right now,” says Olivia, a junior at Thurston High School in Springfield. “There are a lot of fights and people over-sharing to the point of it being uncomfortable.”

According to a recent survey by Pew Research Center, 56 percent of teens are online several times a day and 24 percent say they are online “almost constantly.” But Dr. Pilar Bradshaw says that there are physical and emotional dangers to being constantly connected. It can rob kids of sleep and leave them feeling isolated.

“There’s a very clear correlation between numbers of hours a day spent on social media and depression and anxiety in teens,” Dr. Bradshaw says.

It’s important for parents to set rules and talk with their children and teens about the many dangers found online.

Several local schools, including Thurston High School, have taken steps to help parents understand more about social media. Earlier this year, Thurston High administrators partnered with the Springfield Police Department and Ophelia’s Place to help educate students and staff about social media trends and online safety, and offered parents practical tips on how to dial into their child’s online world.

Parents should know the passcode to their child’s phone. Be aware of which apps they are using and how those apps work. For example, the Kik messenger app hides texts and photos, while apps like Snapchat and Confide allow messages to vanish after they’re read. However, it’s important to teach your child that nothing posted or sent digitally ever really disappears.

“It lands on a server and you have no control over the content you put out there,” says Springfield Police Detective David Grice.

By law, electronic service providers are required to report illegal content, including inappropriate pictures, by forwarding them to the Centers for Missing and Exploited Children.

“There’s been plenty of times where I’ve had an investigation started by the Centers for Missing and Exploited Children, and I end up going to the school to confront that child with an inappropriate picture that clearly they didn’t anticipate a detective having.”

Parents: be vigilant and be involved. Talk with your kids frequently and bluntly about what is appropriate to post online—and what’s not.

“Tell them, ‘It’s not acceptable for you to take any photos of yourself without your clothes on.’ It can be as simple as that, but it’s important that you have that conversation,” Dr. Bradshaw says.

Help your teen understand that what they post now can affect them later. Universities, colleges and employers often look at an applicant’s online presence in determining whether that person is going to be a good representative of their school, their company or their community.

No matter what social networks your teens are using, remind them to always use privacy settings and not to post anything they wouldn’t feel comfortable showing to their grandparents. For more tips and resources for navigating social media with your teen, click here. 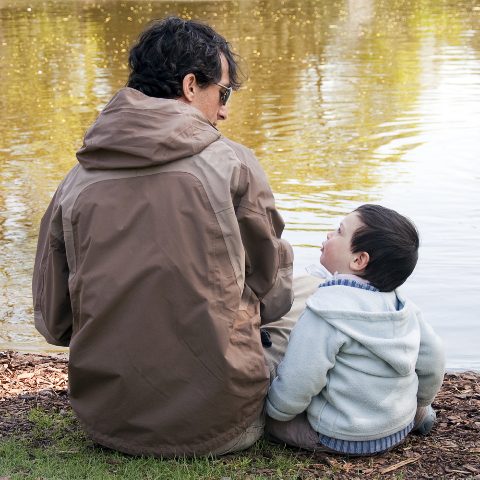 In my last blog post on parenting, I shared one axiom I have lived by as a parent, the 90-10 rule that stressed the benefits of meting out positive over negative comments to children.
Read More >>

Potty training is a big milestone for kids and for parents. But not all children are ready to train at the same age. Just as Rome wasn’t built in a day, parents need to understand that potty training is a process that often takes weeks, months or longer. You may be eager to potty train your child, but success depends on when your child is ready.
Read More >>