Is this your child's symptom?

Causes of Widespread Rash or Redness

Localized Versus Widespread Rash: How to Decide

When to Call Us for Rash or Redness - Widespread

And remember, contact your doctor if your child develops any of the 'Call Your Doctor' symptoms.

Disclaimer: this health information is for educational purposes only. You, the reader, assume full responsibility for how you choose to use it. 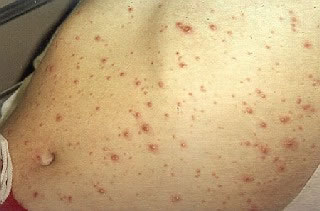 The Chickenpox rash can occur on all body surfaces. The rash is raised, red and itchy.

The rash is no longer contagious when all of the spots are crusted over and no new spots are appearing. This usually takes 7 days after the rash first appears. 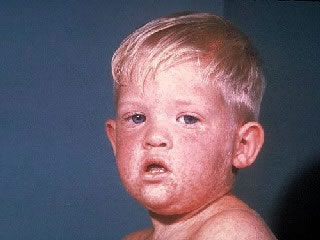 This photo shows a child with measles.

Measles is a very contagious disease. It is caused by a virus. Symptoms include fever, red eyes, runny nose, cough, and spots on the inside cheeks (inside of mouth). A red, blotchy rash appears around day 3 of the illness. It first appears on the face and then spreads to other areas.

This child with measles is showing the common red blotchy rash on his buttocks and back. It is the 3rd day of the rash.

Measles is a very contagious viral disease. Symptoms include fever, red eyes, runny nose, cough, and spots on the inside cheeks.

A red blotchy rash appears around day 3 of the illness, first on the face, and then on other areas. 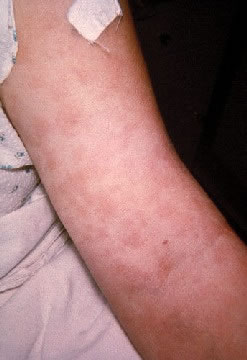 Penicillin Rash on the Arm

This patient had a widespread rash from an allergy to penicillin. The picture shows the arm. 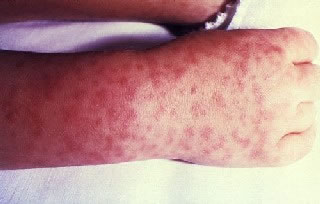 Rocky Mountain spotted fever is caused by a bacteria. The disease is spread by ticks.